Just recently I’ve been re-examining my interest in Saori weaving. My last post talked a little about this, where I had been using my rainbow slub wool to show off a little texture and colour in the weave. Since then I’ve moved on to trying out a few other new things that may prove interesting to others venturing into this art.

I’d like to point out that I’m no expert in this type of weaving. I’m really just making it up as I go along, which I think is completely the best way for this type of weaving. Even though I haven’t really read anything in the how to’s of saori I have looked at other people’s weaving and made one or two educated guesses. The people I really love doing this are Woolwench and Saori Santa Cruz .
I love these guys so go check them out but really, if you just put saori into any search engine you will get some beautiful stuff.

So onto the experiment. I had seen in lots of people’s weaving gaps into which other fibres had been woven or surface texture had been added, or even just left to form loopy warp texture all by itself. This experiment may seem quite obvious once it’s explained but it feels really awkward and wrong to people trying to achieve a nice straight weave.
Here’s what I did:

For the entire weave I chose to use a plain tabby weave. This means the weave doesn’t detract from the rest of what you are doing. I’m not going to talk about the setting up of the warp here, just do what ever feels best with whatever reed suits the yarn you chose. I’ve used a million different kinds of threads here but you could use just one kind and let the weft do all the magic.

Right now we can weave.. just absolutely normally as you would do but don’t beat it into place

As the picture shows you don’t want to do this for your very first row of weaving, you need a few plain weave rows just to secure everything at the beginning.
The next bit may seems a bit alien but trust me it works. You don’t beat the row of weaving down to the last one, you could move it around a little with the beater but remember we are after spaces. Just simply change to the next shed and carry on.
Now you can either repeat the last bit and have a load of gaps or add in some more plain tabby weave.

If you want to carry on in normal weaving be careful not to loose the space you have made by shoving the next line down to hard. This line probably won’t be straight either but will eventually straighten up, and you should have a few nice extra spaces to play around with.

So now what? Well absolutely anything goes. There are no mistakes in saori. The most obvious thing for me was to kind of darn the spaces with some contrasting fibres.

Don’t feel tied to just using wool though, I’ve also threaded some ribbon and a piece of cut up fabric into a space. 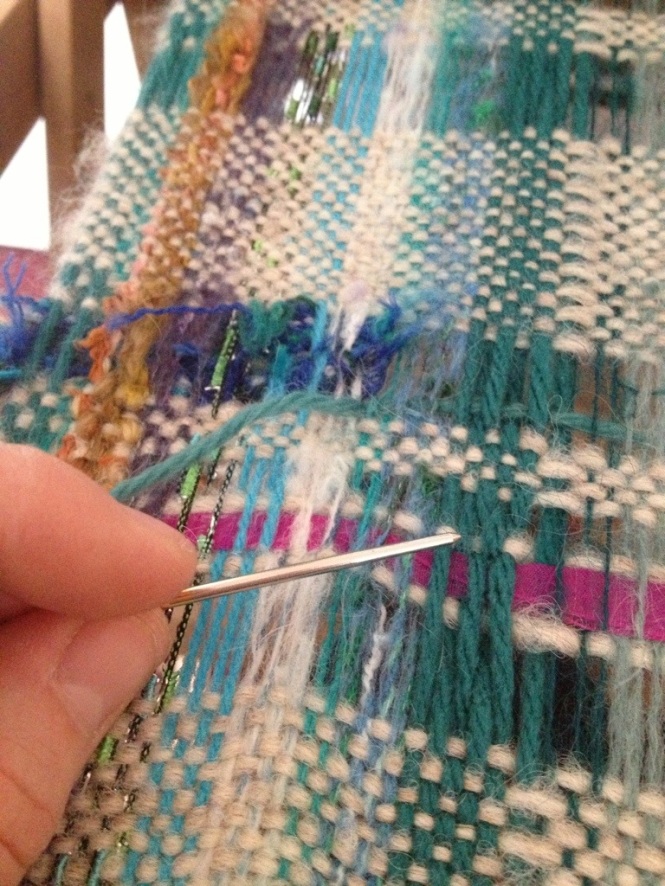 I then thought why not add some unspun roving? As I was weaving it through some of the roving got knotted on itself… which I think looks great so I purposefully repeated it right the way along. Voila beautiful textured surface detail !

There’s loads of different things you can do. I decided to leave a few rows empty to end up with an open loopy effect, but just go with what you feel.
I hope this has been helpful. Like I said I’m no expert but there are loads of other resources out there if you want to read more. One in particular is an article in the latest issue of The Wheel, Ashford’s magazine. This can be purchased from the lovely Sheila over at handspinner.co.uk .

Take care and happy crafting till next time xx